28.–30.10.1918
Preparations for the advance of the fleet that the crews mutiny against. This leads to the revolution.

It all begins with a fleet advance

In October 1918, despite the fact that armistice negotiations are ongoing, the German Naval Command issues orders for the High Seas Fleet assembled in Wilhelmshaven to advance against England. The plan is to provoke a decisive battle. The fleet operation, however, has not been approved by the government. The Naval Command sees the plan as justified by a consequent improvement of the German negotiating position. The officer corps accepts the possibility of an honorable defeat in battle as necessary for the continued survival of the fleet after the end of the war.

When the plans become known to the crews of the capital ships, it comes to insubordination and sabotage. They prevent the sortie and cause the operation to be aborted. The war-weary sailors regard the fleet advance as a futile suicide mission which will put at risk the foreseeable end of the war.

The construction of the naval port on the Jade in the German Bight begins in 1856. Inaugurated in 1869, the port is put into operation one year later. The port facilities are enlarged in several phases, keeping pace with the growth of the navy. Between 1900 and 1909 the existing port facilities are extended towards the southwest by the construction of the Great Harbor. The southern quay is for capital ships, the northern quay for torpedo boats, while the coal terminal is located in the west, today’s “Wiesbaden bridge”. 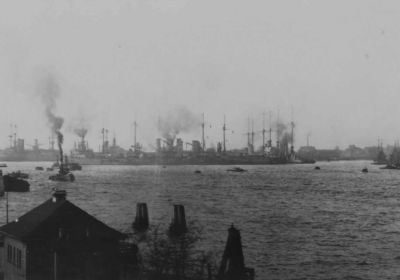