The Revolutionary Role of the Wilhelmshaven Dockyard Workers

Most of the protesters marching through the city on the morning of November 6th are sailors. In the afternoon, civilians, especially workers at the Imperial Dockyard, join in the movement and lay down tools. Almost everywhere, workers and soldiers join forces to propagate the revolutionary movement. However, from place to place their influence varies. Thus, the workers in Kiel play a crucial role in developing the movement from mutiny to revolution. The Kiel shipyard workers are unionized to a greater extent than their counterparts in Wilhelmshaven and the Independent Social Democratic Party of Germany (USPD), the left wing social-democrats, has a broader base among workers in Kiel. This promotes the mobilization of the workers and facilitates the formation of the first Workers‘ Council in Kiel. While in many places it is the soldiers that bring about the revolution, later, organized labour is often allowed to take over. But not in Wilhelmshaven, where the Council of 21 remains dominated by soldiers.

In 1856 the construction of port facilities begins in Wilhelmshaven. From 1864 facilities are set up for shipbuilding. The dockyard starts operation in 1871 and is repeatedly expanded in line with the military build up of the German navies. The Dockyard Main Gate in Gökerstraße was built in 1876. Shipbuilding is carried out at the shipyard only until the end of the World War II. Today, the premises have become the home of the Wilhelmshaven Naval Arsenal. Almost unaltered, however, the Dockyard Main Gate continues to serve as the number one entrance. 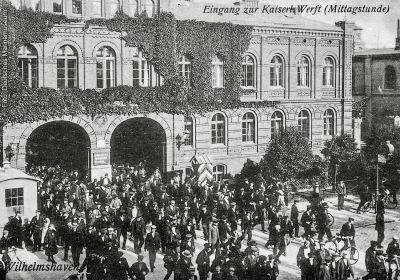 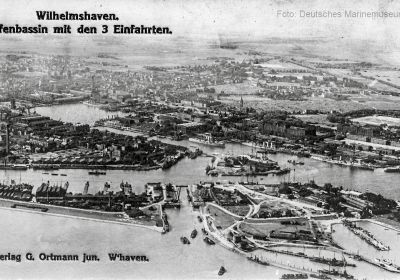 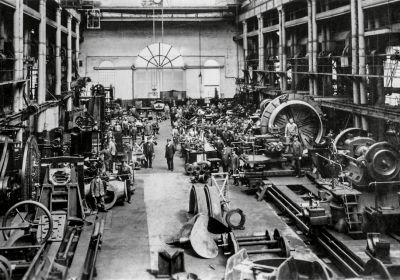