6.11.1918
Protest marches unite in front of the command building.
Proceedings with Admiral von Krosigk aligned to the Kieler 14 Punkte.

Negotiations between Sailors and the Governor on November 6th

On November 5th, news of the revolution reach Wilhelmshaven. The next morning, thousands of sailors gather for protest marches. Accompanied by a military band they march through the barracks, the shipyard and the city center, attracting more and more followers. Red flags appear. At noon, the parades unite in front of the station building. Roadblocks are unable to withstand the crowds.

The station building is the headquarters of the Chief of the Naval Station and the Governor of the Festungsbereich Wilhelmshaven (restricted military area of Wilhelmshaven). Put under pressure by the revolutionaries, he negotiates with a delegation of sailors. The soldiers make demands that are based on those formulated in Kiel. First and foremost is the release of all arrested mutineers. Further demands concern the day-to-day routine in the navy. No political demands are made at this point. Vice Admiral von Krosigk for the most part agrees to the demands. However, his hopes this will defuse the situation prove vain. That afternoon, the city is in the hands of the revolutionaries.

The command building of the North Sea Naval Station

The Neo-Tudor style command building of the North Sea Naval Station, built in 1872, stands at the northern end of prestigious Adalbertplatz (Adalbert Square). Owing to its architecture it is also known as the “White Castle”. The station building is the seat of the Commander of the North Sea Naval Station, one of the two domestic commands of the Kaiserliche Marine (German Imperial Navy). In 1944, the building was devastated by bombs and demolished after the World War II. 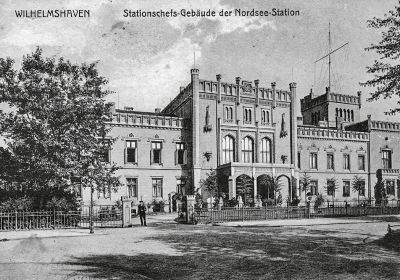 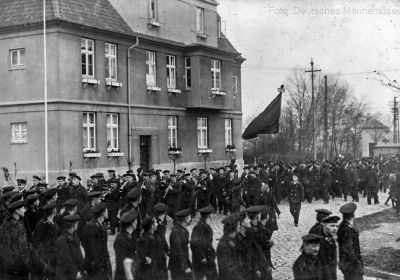 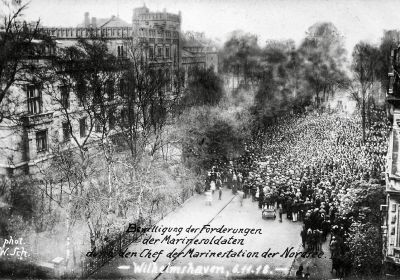